Even in a digital world, the majority of us rely on our hearing to connect with others. But according to reports, we’re experiencing hearing loss more frequently — and at 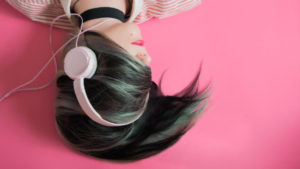 younger ages — than ever before. And while it’s entirely possible that our reliance on technology has had negative effects on our auditory skills, technology may also provide a solution to the growing problem.

Statistics show that approximately 15% of American adults, or 37.5 million people, report that they have some trouble hearing. The U.S. Department of Human and Health Services report that only 46% of adults who have hearing problems have seen their doctors about these issues during the past five yeas. And it’s not just a problem for older people, either. While the World Health Organization (WHO) estimates that 20% of people between the ages of 12 and 35 suffer from hearing loss (a percentage that has increased by one-third since the late 1990s), a new survey conducted by the National Foundation for Deaf and Hard of Hearing found that 34% of freshman-year high school students in Australia had “abnormal hearing.”

One possible reason? The volume settings on their earbuds and headphones are too loud. While listening to music while exercising can improve workout performance by 15% (and listening to a podcast or streaming a TV show can be an enjoyable experience), cranking up the volume can have drastic consequences. More than one-third of teens tested reported experiencing ringing in their ears, which could be an early indicator of tinnitus. Interestingly, a separate survey conducted by The Harris Poll found that 47% of older adults who listened to loud music in their youth now have some degree of hearing loss. So whether you listened to your favorite band on vinyl and at Woodstock or you enjoy hearing new downloads on your iPhone, you might face a future that’s difficult to discern from an aural standpoint.

It’s no wonder that WHO recommends that young people not listen to music or other noise at maximum volume for more than six minutes per week. What’s more, damaging decibels might be a lot softer than you realize. Audiologists are warning that hearing aids could soon become as common as glasses, with upwards of 1.1 billion young people facing potential hearing loss. As it is, more than 10 million people throughout the U.S. use hearing aids. But since hearing aids are expensive (and aren’t covered by Medicare), it’s possible that countless Americans will have to spend thousands of dollars in the not-so-distant future just to know what’s going on around them.

But even though our devices could be partially to blame for hearing loss, there are some technological solutions to the problem, as well. There’s now a haptic garment, called SoundShirt, being developed that allows those with hearing issues to literally feel music around them through vibrations. EarDial, a new type of discreet earplugs, were developed to be ideal for concertgoers; they reduce all noise by 20 decibels without decreasing hi-fidelity sounds, making for a better overall live music experience. There are also a number of apps, like Tunity and Ava, that can allow people with hearing issues to listen to a TV program though their phones or even transcribe dialogue in real time — meaning that no one has to miss out on the action or feel left out of the conversation. Some live theaters even have smart caption glasses to be more inclusive for patrons who are deaf or hard of hearing, which provide closed captioning in real time according to the script being performed on stage. And Bose, known for its high-quality headphones and speakers, is making FDA-approved headphones to serve those with reduced hearing capabilities — which, if they comply with federal regulations, will not come with the risk of making existing auditory issues worse.

Certainly, the best way to avoid future hearing issues is to make major changes in the present. By turning down the volume and limiting exposure to loud noises, you may be able to mitigate hearing loss. But since we live in an increasingly sound-heavy world, the reality is that many of us may not realize we’ll face these issues until it’s too late. For now, you might want to invest in some high-quality earplugs, cover your ears, and keep an eye on technological innovations.